Climate Change in the ACT 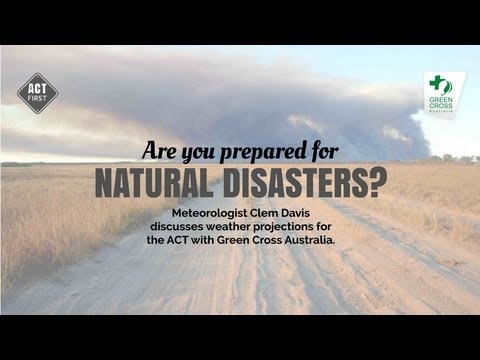 Determining whether a specific, single extreme event is due to a specific cause, such as increasing greenhouse gases, is difficult, if not impossible, for two reasons: 1) extreme events are usually caused by a combination of factors; and 2) a wide range of extreme events is a normal occurrence even in an un-changing climate.

Extreme events usually result from a combination of factors. Because some factors may be strongly affected by human activities, but others may not, it is not simple to detect a human influence on a single, specific extreme event.

Nevertheless, it may be possible to use climate models to determine whether human influences have changed the likelihood of certain types of extreme events.

A changing climate leads to changes in the frequency, intensity, spatial extent, and duration of extreme weather and climate events. These include extreme temperatures, heatwaves, drought, flooding, bushfires, tropical cyclones, and storm surges.

The natural climate variability that underlies all extreme weather events is now influenced and altered by the effect of human-induced warming of the climate system.

Future climate change impacts will be experienced mostly through extreme events rather than gradual changes in mean temperature or rainfall.

Our climate is changing

Global warming is undeniable, according to the recently released assessment by the Intergovernmental Panel on Climate Change (IPCC). It concluded the 30 years until 2012 were probably the warmest in 1,400 years driven by greenhouse gas levels not seen for 80,000 years...

According to the Australian Academy of Science, "The Earth’s climate has changed. The global average surface temperature has increased over the last century and many other associated changes have been observed...

The CSIRO and Bureau of Meteorology have produced climate change projections for Canberra based on the probabilistic method. Learn about how temperature, rainfall and other factors are projected to change...

Impacts of climate change in the ACT

Climate change in the ACT region is expected to have a number of local impacts including biodiversity, human health, water supply and agriculture...

In 2011 the Centre for Australian Weather and Climate Research (CAWCR), a joint venture between CSIRO and the Bureau of Meteorology, released an important paper which includes sample extreme daily temperature projections for Canberra...